Perceptions of the Political Landscape 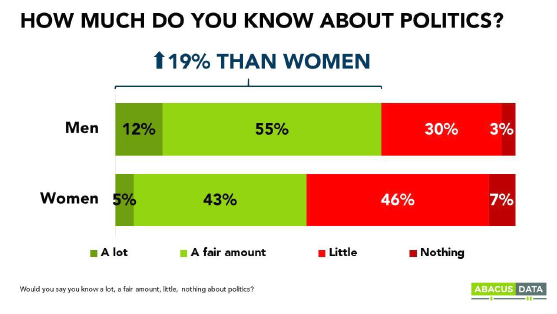 Politics are perceived as competitive, but also as an opportunity to help others. When asked to pick 5 terms that best describe politics, power was ranked first by 28% of women, and was overall the most selected term. Though selected fewer times overall, ‘opportunity to help people’ was the second most frequent term ranked as number one. Competitive was ranked first by 14 points and was also frequently brought up in the focus groups, but the term was described differently between women who were involved in politics and those that were not. Competitive was seen to be divisive among women who were not involved in politics, but seen as strategic among women who were involved in politics.

Conversely, politics was not seen as risky or tiring (they were not chosen as a term to describe politics by 62% and 69% of women, respectively). At the same time, politics was even less likely to be described as exhilarating, inspiring, interesting, or innovative. 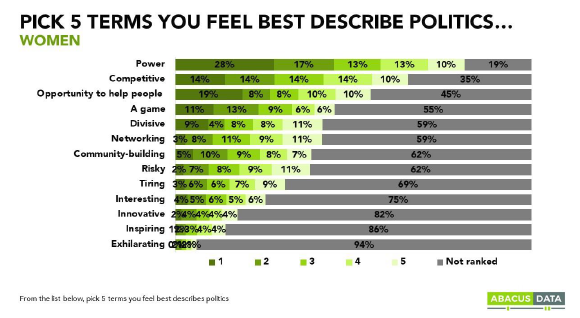 Nearly all agree there is a difference in treatment in politics between men and women. We asked women in both focus groups if it was easer or harder for women to be involved in politics compared to men. Differences in treatment were identified in both groups. Those in the group of women who were not politically involved spoke to the public persona required in higher level positions and felt women would face more discrimination, and critiques. A few in the group of politically involved women felt there was a lack of female mentors to ‘bring women in’ to politics compared to men, and increased judgement towards women for ‘abandoning family responsibilities’. Among both focus groups, there was also acknowledgement that while there may be equal (or close to) number of men and women involved in lower levels of politics, high-level roles were fulfilled mainly by men. 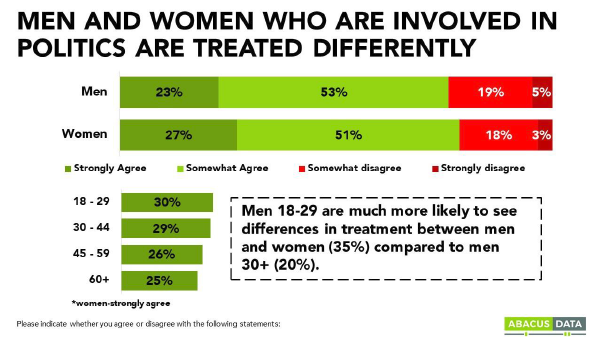 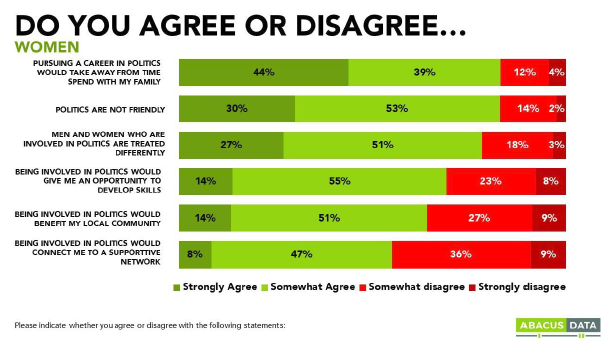 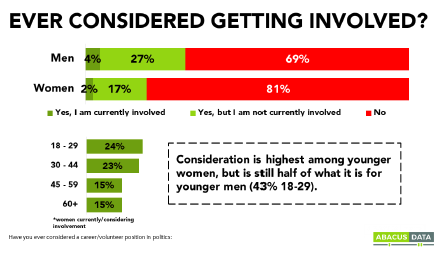 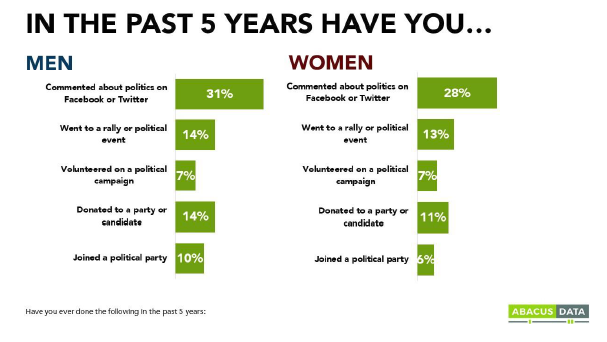 Women surveyed did not see their traits align with those they used to describe politicians. Women were much more likely to prescribe the traits of competitive, confident, thick-skinned, and risk-taker to politicians, rather than themselves. When discussed in the focus groups, these traits were also attributed to politicians, but they were also traits that the women did not want to subscribe to. The competitive, thick-skinned nature of politics were attributed to reasons why they might not want to get involved. 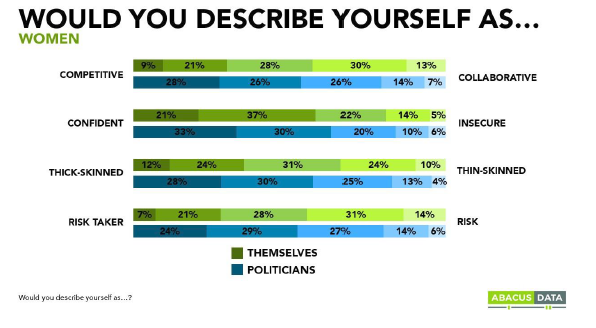 For women who are involved, involvement in politics is gradual. During discussion in the focus group, those who were politically involved started participating in politics when they were invited by a colleague, they found politics as a way to get involved in their campus community, or they started attending municipal meetings because they wanted to learn more. From there, their involvement seemed to grow naturally, and increase over time, and became an integral part of their careers, or social circles. Women in the focus group of those who were not politically involved did not see it this way. They portrayed political involvement as a disruption to their current lifestyle, career, and values. Similarly, for those involved in politics, getting involved encompasses everything from door-knocking to running as a candidate, whereas those who were not politically involved were more likely to equate political involvement with the more public-facing, time-intensive roles.

This was reflected in the survey, in particular the worry about a large time commitment for political involvement. When asked for reasons why they would not get involved in politics, 48% said a large time commitment was a very good reason not to get involved in politics. Other concerns were a lack of skills and knowledge, which for politically involved women were not concerns as they had developed them over their gradual introduction into politics.

A supportive family/peer group is important. Family and child obligations (both current and future) were the biggest barriers to involvement discussed in the focus group of women who were not politically involved. The perceived disruption to their family life (which many say they already struggle to balance with their career) was too much of a barrier and would need to be addressed before they could even consider other barriers or helpful resources. For those in the group of women that were politically involved, they acknowledged that without the support of their partner they would not have been as involved. Younger participants noted that their lack of family obligations now allows them to be more involved, but this is a concern they have acknowledged might come up in the future.

Among survey respondents, family obligations, like childcare and household responsibilities, were a very good/good reason for 74% of women, to not be involved in politics. 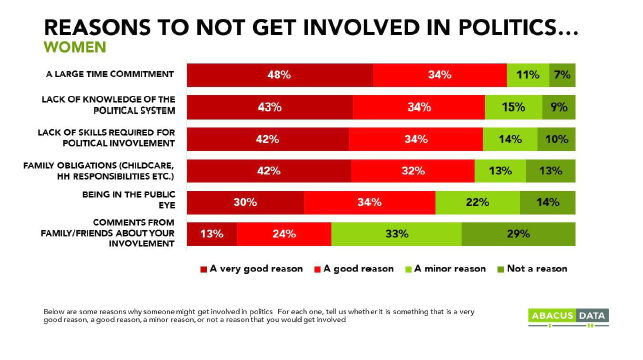 Those who aren’t interested think there are more effective/rewarding ways to give to the community. Those in the focus group of women who were not politically involved felt they could be just as effective in making change for their community outside of politics, and would also be able to make more tangible changes where they can see immediate results. These participants felt that community involvement outside of politics also allowed them to be more specific about the types of causes/type of involvement they wanted to participate in and could become connected to a network that had the same specific interests and goals. Many had already found this and were content to stay connected with these individuals. 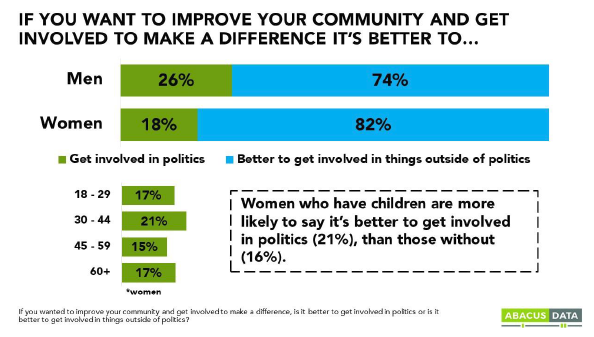 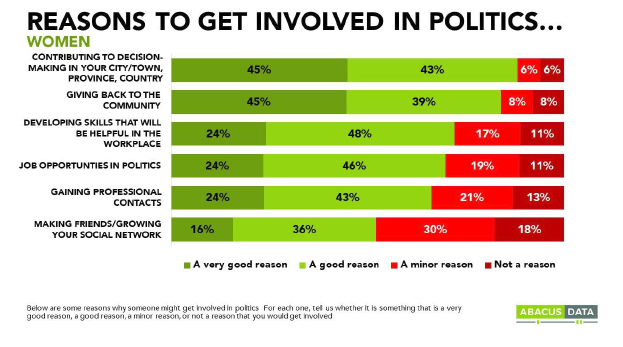 Many spoke to the importance of mentorship and visible role models. Mentorship programs were important for all levels of politics so women who may be interested could see the ‘nitty-gritty’ and also better understand what the obligations of involvement are (i.e. time commitment, how do they balance career/politics/family?). A few thought it would be just as helpful for male political role models to be mentors and role models, to show how they also balance family and career.

Increasing knowledge and information of political involvement, from a young age, is important. Women in the focus group of not politically involved women thought teaching young girls and women about political involvement as a career opportunity was important. One participant spoke of a similar program that works to increase women in business by showing them the opportunities offered by a career in business. Participants agreed that a similar program for politics would be very successful and they would have wanted to participate/have their daughters participate. For some, their career did not naturally progress to politics (i.e. science degree) so they did not see the relevance/overlap of politics with their career until much later.

An online tool should provide basic information, but also act as a guide to connect women to mentors and information events. An online platform would be good for answering basic questions on the steps to get involved, (a step-by-step guide) but most felt the platform would be best suited as a hub connecting women to mentors/local groups involved in politics. Those in rural areas suggested that the hub might be especially helpful for women who are not geographically close to a mentor who can provide this information, but also wondered if internet connection could be a barrier for this tool.

Increase understanding among women that there are many ways to get involved in politics at varying intensities. During the discussion with those not politically involved, participants consistently associated the term, political involvement, with public facing positions or roles (such as being a candidate, communications manager etc.), even with prompts encouraging them to associate the term with involvement at all levels. Increasing awareness of what political involvement means, in particular promoting involvement in roles that are not time consuming, could counteract worries of a large time commitment and difficulty in fulfilling family obligations. 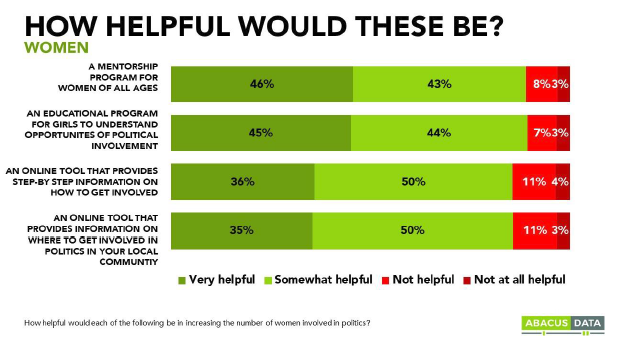 Testing the suggestions provided in the focus groups in the survey along with the online tool from Equal Voice, all received positive reviews. Among women, the most popular were a mentorship program for women of all ages (46% very helpful), and an educational program for girls to understand opportunities of political involvement (45%).

This was similar to the sentiment among women in both groups. Participants placed value in creating a personal connection, or having a conversation with someone who had experienced political involvement. Most associated this with a mentorship program, but recognized this could be arranged, or even conducted through an online platform. Minority women were more likely to favour all suggestions, compared to women who were not of a visible minority. All tools were also more likely to be most popular among women women 60+, compared to other age groups.

One of the biggest barriers to political involvement identified is an overall lack of knowledge, both in terms of knowledge of the political system and in terms of the commitment required. The solutions suggested by focus group members, and supported by survey respondents can directly address this issue.

The mentorship and educational program (suggested by participants in focus groups), received positive response by other focus group participants, as they provided an opportunity to gain knowledge from someone who has had a lived experience in the role. Participants in focus groups felt that these programs could help answer questions about the extent of the commitment of political involvement, which could eliminate some of the biggest barriers that surfaced in the survey results.

About the Focus Groups

The focus groups were held in Ottawa on September 10th, 2018. The first group was comprised of 7 women who were highly involved in their community but not involved in politics. Specific types of involvement included business executives, and industry/community board members. The second group was comprised of 7 women who were involved in politics in a variety of ways including board members, dedicated volunteers, elected representatives, and past candidates. Both groups had representation from rural and urban/suburban Ottawa.

The survey was conducted online with 2,000 Canadian residents aged 18 and over from Sep 14th to 18th, 2018. A random sample of panelists were invited to complete the survey from a set of partner panels based on the Lucid exchange platform. These partners are typically double opt-in survey panels, blended to manage out potential skews in the data from a single source.

The data were weighted according to census data to ensure that the sample matched Canada's population according to age, gender, educational attainment, and region. Totals may not add up to 100 due to rounding.