NEW: Equal Voice is proud to present the Blueprint for Gender-Sensitive Legislatures report.

This report provides background on the Systemic Change initiative undertaken by Equal Voice and includes research findings, lessons learned, and policy recommendations for legislatures in Canada.

Equal Voice is currently working on a nationwide multi-partisan initiative to address some of the systemic barriers within legislatures and Parliament that contribute to the under-representation of women in politics at the provincial, territorial, and federal levels in Canada. Funded by the Department for Women and Gender Equality, this project will produce recommendations for change and work with key stakeholders to develop implementation strategies.

What are the Goals of the project?

What does Systemic Change mean?

Systemic Change, in the context of political structures, means adjustments, transformations, and/or modifications to systems, practices, and spaces. When the Canadian political system was built, only a small proportion of the population was able to participate. As society changes, political systems also need to change to reflect the diversity of the people it represents.

Furthermore, Parliament, provincial legislatures, and formal political arenas are places of work, and these institutions need to be responsive to those who work there, including MPs, MPPs, MLAs, and staff.

Why do we need Systemic Change?

By removing barriers and promoting pro-active policies that both allow and encourage women to succeed in politics, we can shorten the time it will take to achieve gender parity in Canada’s various levels of governments.

Why do we need more women in Politics?

Political and policy decisions affect the lives of individuals, families, and communities. Policy benefits from a diversity of opinions, and Parliament is more efficient when legislators reflect those they represent. Women represent half the population and their visible contribution and leadership is important.

What does “key stakeholders” mean?

Equal Voice is a multi-partisan organization, which means that it is mandated to work with all political parties in Canada. Equal Voice’s policy recommendations are designed and meant to receive support from all political actors – on both government and opposition benches.

What are some examples of Systemic Change?

Examples range from the creation of formal policies within legislatures, such as a maternity and/or parental leave policy and/or harassment policy, to changes to standing orders, childcare access, predictable sitting calendars, and the modernization of Parliament, such as e-voting.

While Equal Voice is a national organization, we recognize the regional differences that exist across this country and are working very closely with partners and stakeholders within each Province and Territory to identify specific needs. 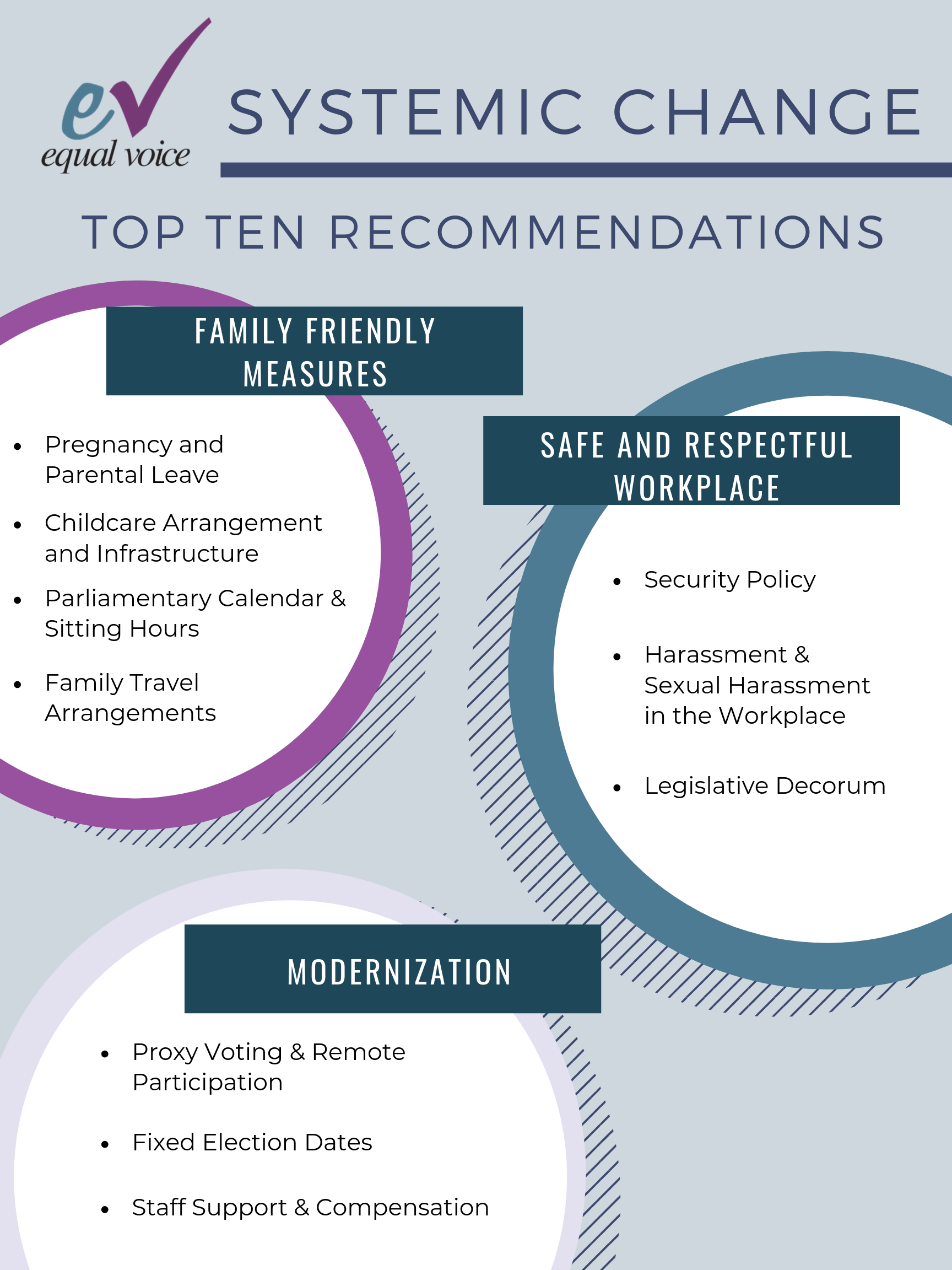