Equal Voice launches its Power in Parity portal – a useful tool designed to easily connect voters to women candidates ahead of the 2019 federal election.

(Ottawa, ON – October 3, 2019) Today, Equal Voice released its analysis on the number of women federal candidates running in the 2019 federal election, revealing more women candidates in this election than ever before in Canadian history. The data follows the closure of the official candidate nomination period for federal parties on Monday.

“It’s encouraging to see a significant increase in the number of women putting their name on the ballot this election. It shows that both the parties and the public recognize the need to increase women’s representation in the House of Commons,” said Equal Voice Spokesperson Nasha Brownridge. “What remains to be seen, however, is how, or if, this will translate into electing more women on October 21. Are women running in winnable ridings? What barriers do women face on the campaign trail? These are the questions Equal Voice will be speaking to this federal election and addressing through our Power in Parity portal.”

At the time the writ dropped, there were 90 women MPs out of 334 in the House of Commons, or 26.9%, placing Canada at an embarrassing 60th place in the Inter-Parliamentary Union’s (IPU) global rankings of women in national parliaments. Should Canadians elect over 102 women on October 21, the 30% mark would be attained in Canada and its global rank would be closer to the top 50.

Brownridge said that the ultimate goal is gender parity. However, electing at least 102 women in 2019 and crossing the 30% mark would be historic, and a step in the right direction. 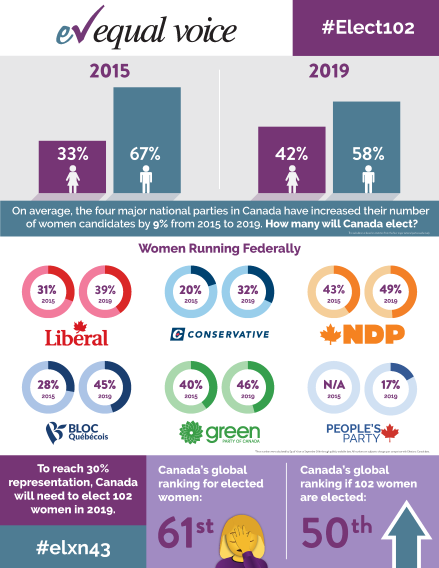 Tools and programs to get women elected

Per its mandate, Equal Voice puts forth a variety of initiatives to help women get elected. Just in the last year for example, it has hosted a number of campaign schools across the country; launched a chatbot called Evie designed to help Canadians connect and support women candidates in nearby ridings; and organized its second iteration of Daughters of the Vote,  a national multi-partisan forum for 338 young women.

Equal Voice has now launched another useful tool: The Power in Parity portal, which lists all women candidates running federally across Canada, as well as a link to each woman’s respective web site. It is the first site of its kind in Canada.

“We often get asked how someone can concretely help more women get elected,” said Brownridge. “During an election period, the best way is to find a woman candidate, and support her by donating to her campaign, volunteering, taking a sign – any small act of support can go a long way. Our Power in Parity portal equips the public to do exactly that.”