By Shari Graydon of Informed Opinions

Can snowplowing be sexist?

Even if you live in Ottawa, a city that removes snow from its downtown core with military precision, you’ve probably never asked yourself that. Until I read Caroline Criado Perez’s Invisible Women – Data Bias in a World Designed for Men, it had never occurred to me to pose the question either.

But it matters that the answer is yes. And this is just one of a thousand reasons that our democracy needs to elect sufficient numbers of women to erase our chronic under-representation in the halls of power.

When you grow up in a world dominated by male decision-makers, the default assumption is that’s the way it is. And many of the stories we tell ourselves – “men are bigger risk takers”, “men have more confidence”, “it’s easier for men to raise money” – reinforce our willingness to accept that status quo.

But many other countries – some of them with much younger democracies and much less advanced economies – do better.  Despite significant gains women have made in every realm, Canada ranks a shocking 61st worldwide in terms of women’s political representation. And our failure to draw on women’s talents and insights has huge implications for every aspect of our lives.

We intuitively grasp how ridiculous it would be if parents were largely left out of policy decisions that affected families… If people living with disabilities had little to no voice when it came to making cities and technology accessible. And yet even though it’s 2019, women still occupy only 27% of the seats in our federal parliament. That’s indefensible.

Women’s voices in the news media are similarly under-represented, so over the past ten years, Informed Opinions has trained women all over the country to translate their knowledge and experience across many fields and sectors into news commentary. We motivate and support women in helping the broader public understand issues important to our lives. More than a thousand of them have done so.

In an effort to understand what stories are missing when women’s voices are absent, we created a word cloud from 100 published op eds penned by women we’d trained. By removing words that also commonly appeared in op eds written by men, we were able to identify which topics and concerns get significantly less attention if women aren’t consulted. 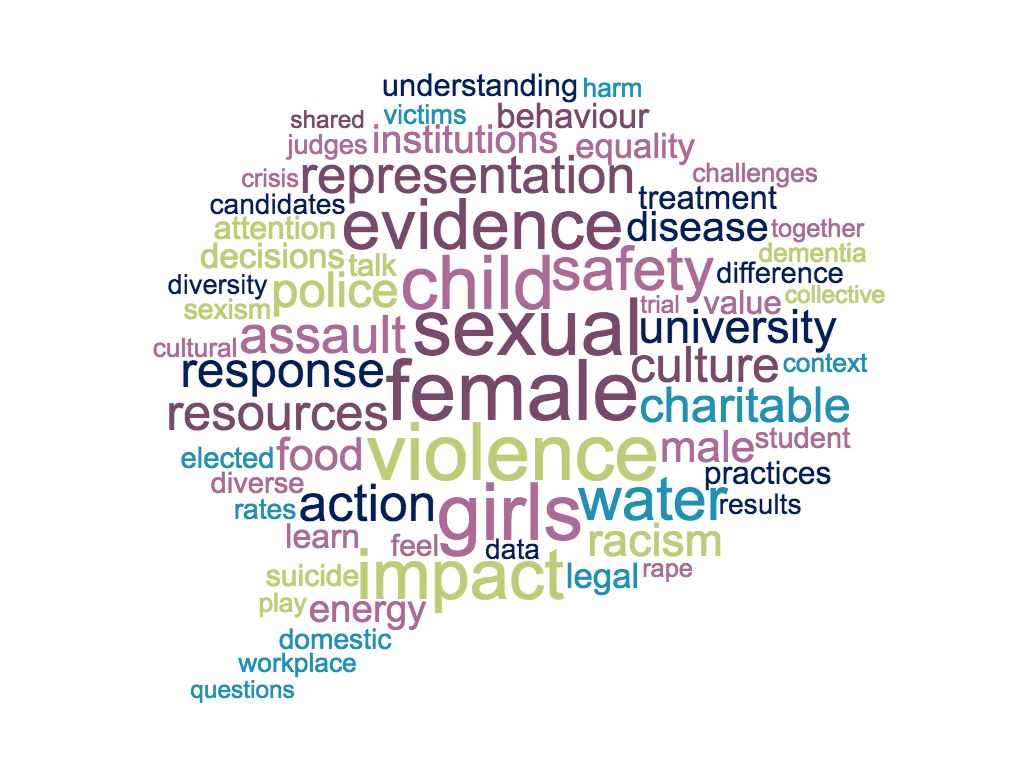 Some of the issues on the list are heartbreakingly predictable. Even before the #MeToo movement, the words “sexual” and “assault”, “violence” and “female” were prominent.

But many other words point to essential survival matters for all human beings, such as “food” and “water”, “evidence” and “safety”, “disease” and “treatment”.

We also recently launched an online digital tool that measures in real time the percentage of women and men being quoted in influential news media. Our Gender Gap Tracker makes clear that men’s voices in public discourse dominate by more than two to one. It also tells us that 60% of the people quoted most often are politicians. That’s why it’s so important when party leaders appoint gender-balanced cabinets. Our equitable representation in one arena helps to eliminate our absence in the other. 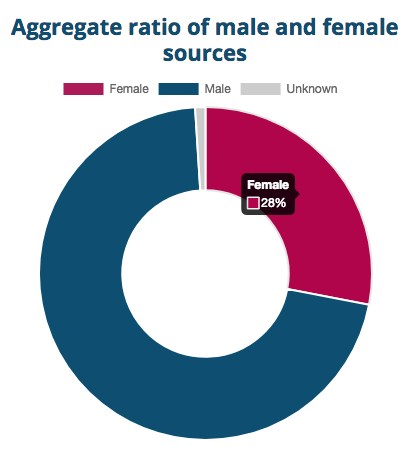 When Rachel Notley became leader of the Alberta NDP, she told her team: “Don’t even think about bringing me a slate of candidates that’s not gender balanced.”* That needs to be every leader’s default. And between now and the next election, Informed Opinions will be collaborating with Equal Voice and others to encourage all political parties to adopt this gender equity principle. Because it’s fundamental to representation.

As for the sexism of snow-plowing, here’s the deal:

The order of priority in which streets are plowed can have significant consequences for women’s lives. Not only that, but those consequences can end up costing taxpayers in health care costs.

The short story is that clearing pedestrian and public transit routes first, as opposed to main arteries, results in fewer accidents and hospital visits, most of them involving women. Because while most men travel alone, many women travel encumbered by shopping bags, strollers or older relatives. Women also generally walk further than men, in part because they tend to be poorer.

You can read Invisible Women yourself to identify the myriad other reasons. These include the fact that male-biased voice recognition software endangers women’s lives and male-biased performance evaluations stunt our careers. Elected officials aren’t the only people responsible for fixing those problems, but because their contracts are up for renewal every four years, it’s easier to ensure gender parity in their ranks.

So, this federal election, if you’re not running for office yourself, support a woman who is, whose values and priorities you share. Knock on doors for her, donate to her campaign, or invite your neighbours to meet and support her, too.

Snow removal is a mere drip off the pointy end of a massive icicle of policy gaps, and so much more needs to be done to make Canada genuinely democratic, and as fair, healthy and prosperous as it can be.

Shari Graydon is the founder and catalyst of Informed Opinions, which is amplifying women’s voices to bridge the gender gap in Canadian public discourse by 2025.

*Rachel Notley spoke about this in Kate Graham's fabulous "No Second Chances" podcast. Every one of the 12 episodes offers context, inspiration and enlightenment about the critical importance of women in politics.