On the (expected) eve of the official writ drop, we bring you the numbers!

Less than 6 weeks out from election day, #elxn43 has yet to be called – but pundits and parties alike are excitedly awaiting the expected writ-drop tomorrow! Planes and buses are being stocked, campaign offices unveiled, and the central offices of the political parties are buzzing with anticipation.

It is difficult to have a clear picture of what this election has in store while nominations for most major political parties (other than the Conservative Party of Canada, that has nominated a full slate of candidates) are still ongoing, but in looking at the preliminary data on women’s representation and candidates we can make a few observations:

While far from Equal Voice’s ultimate goal of parity, there has been demonstrable progress in terms of the total number of women nominated for the upcoming election, and significant efforts by most political parties to see this number increase. 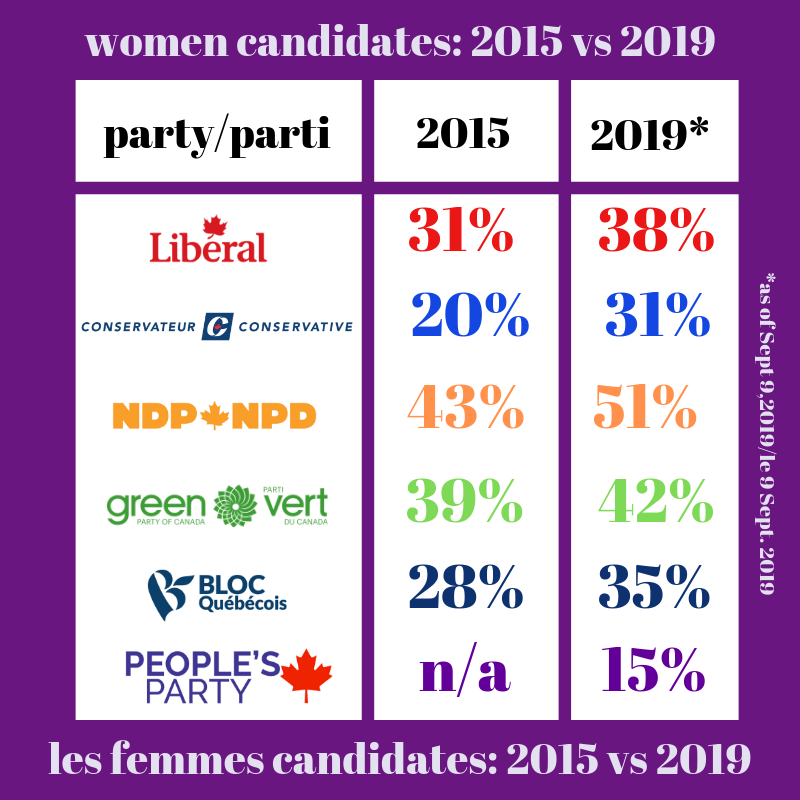 We can see a clear pattern of progress for all parties that ran candidates in 2015, leaving ample room for optimism leading into the 2019 election period. While the preliminary numbers suggest an increase in the number of women running for most political parties, what does this mean for the ultimate outcome of the 43rd general election?

*Numbers were retrieved by Equal Voice from a variety of sources and are accurate within a small margin of error as of September 9th, 2019. Only some were verified by the political parties at the time of posting.*