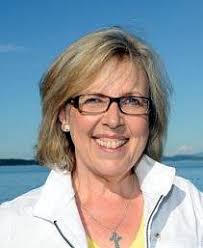 “Elizabeth May has been a tireless and effective leader for the Green Party since 2006,”, said Eleanor Fast, Executive Director of Equal Voice.  “She has also been a champion for women’s participation in politics and has played an important role in Equal Voice events during her time in Parliament, including addressing the historic sittings of Daughters of the Vote in 2017 and 2019.  We are incredibly grateful for her leadership in working toward gender parity in politics.”

With May stepping down as Green Party leader, no federal party has a woman as leader. However, Equal Voice is delighted that the Green Party has named a woman - Jo-Ann Roberts - as interim-leader, and looks forward to working with her - and all party leaders - to advance women in politics.

In the recent federal election the 46% of all Green Party candidates were women, and two out of their three elected MPs are women.

Elizabeth May was awarded the 2011 EVE Award by Equal Voice for advancing women in politics.

“Throughout her eclectic career, Elizabeth May has advanced women’s leadership in all aspects of society, especially in environmental issues and politics”, said Sharmila Setaram, Equal Voice Board Chair, “She is a tireless advocate and will no doubt continue to make waves as MP for Saanich – Gulf Islands”.